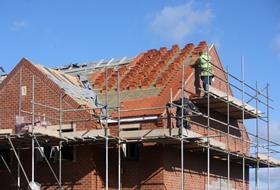 A cross-party group of MPs is urging the government to help smaller firms build more homes in the coming years.

It said smaller firms face a number of barriers including access to finance and the amount they have to shell out on developer contributions such as the Community Infrastructure Levy.

Tory MP Robert Courts, chair of the all-party parliamentary group, said: “Government action has started to address some of the needs of small builders but we must leave no stone unturned to truly unlock the housing market.

“A new, dedicated strategy for small housebuilders would be an important step in achieving this. This needs to centre on a positive package of measures that removes some the biggest barriers for small builders.”

Labour’s Catherine West, who is vice chair of the inquiry, said the current state of the UK housing market meant there was huge potential for small builders to make a vital contribution to the housing crisis.

She said: “Our report sets out a series of proposals that will enable small builders to scale up, grow and build more which will help relieve the housing shortage.

“The simple truth is that the UK cannot expect to build the homes we so desperately need unless smaller builders are backed. Giving small builders the keys they need could result in tens of thousands of urgently needed homes being built up and down the UK.

“This will help create jobs, stimulate economic growth and provide the homes the UK need.”

Mike Cherry, national chairman at the FSB, said: “It is vital that the government does not turn a blind eye to the findings of this report and commits to creating a dedicated strategy aimed at giving small homebuilders the finance, skills and support they need to help fix the broken housing market.”