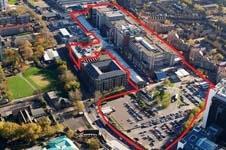 Rupert Murdoch's News International media group has appointed architect Future Systems to redevelop its existing campus in Wapping after deciding against a relocation of its premises to the City or Canary Wharf.

James Murdoch, European chairman of News Corporation, said that Future Systems, the architect behind Selfridges at the Bullring in Birmingham and the Natwest Media Centre at Lord's, had an “exciting and innovative vision” for the East London project.

The scheme will be built on the Wapping site where the Times, Sunday Times, Sun and News of the World newspapers are printed. It became known as “Fortress Wapping” after becoming the location of violent trade union pickets against Murdoch's organisation during the 1980s.

The scale is huge, and the opportunity even bigger. This development will be one of the most exciting in London

News International said that it plans to locate all of its European businesses there when the building is completed in 2012.

Amanda Levete, principal of Future Systems, said: “It's an enormous privilege to be given such an ambitious brief; to create an environment to capture the energy and spirit of an organisation at the forefront of global communications. The scale is huge, and the opportunity even bigger. This development will be one of the most exciting in London.”

Arup has been chosen to manage engineering and sustainability, while Pringle Brandon has been appointed to do workplace consultancy and space planning. Savant will act as QS.