Investigation says scheme is £75m short of what it needs 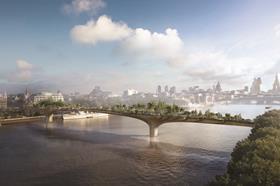 An investigation by the National Audit Office (NAO) has estimated that there is a £75m funding gap between the Garden Bridge’s estimated costs and private investment.

The auditor also found that the Department of Transport is likely to lose £22.5m of taxpayers money if the Thomas Heatherwick designed project does not go ahead. This financial exposure consists of £13.5m of costs to date and a further £9m in cancellation fees.

“There remains a signifcant risk that the project will not go ahead,” the auditor said primarily because the Garden Bridge Trust has still not secured the required land on the South Bank despite aiming to start construction next spring, 18 months later than planned.

Cost estimates for the scheme have also risen from £158m outlined in the original business case to £185m this August according to the chairman of the Garden Bridge Trust, Lord Mervyn Davies, which has also placed French contractor Bouygues on standby having awarded the firm the build contract in April 2015.

The auditor concluded that the Trust is also likely to come to the government cap in hand again if it cannot plug its funding shortfall.

“The pattern of behaviour outlined in this report is one in which the Trust has repeatedly approached the government to release more of its funding for pre-construction activities when it encounters challenges. The department, in turn, has agreed to the Trust’s requests,” the NAO said.

The NAO’s investigation into the Garden Bridge’s funding centred on the decision by the DfT to grant £30m of funding for the construction of the bridge and the subsequent decisions on three separate occasions to increase the funding prior to construction starting on the project – where civil servants twice advised ministers against doing so.

George Osborne in his then role as chancellor announced as part of the 2013 Autumn Statement that the government would commit this money to support the development and construction of the Garden Bridge. The chancellor subsequently nominated DfT as the source for the government’s funding of the project subject to a satisfactory business case being made for the project.

A cap was imposed of £8.2m on the amount of money to be spent from the government funds during pre-construction as another protection for the taxpayer. This cap was breached on three occasions despite increasing uncertainty surrounding the project after request form the Garden Bridge Trust.

In a statement, the Garden Bridge Trust said: “We are working hard to conclude the necessary land deals required for the building of the South Landing which has been a complex process with local challenges and negotiations which have taken time to resolve.

“78% of the project cost will be raised privately. The Trust confirmed in July that it has £56m to raise. It has received an investment from government of £60m which was always intended to kick start private investment. Of this £60m investment, £20m is being treated as a loan and around the same amount will be repaid to Treasury in VAT. This means the public investment will sit at around £20m in line with the cost of the Millennium Bridge.

“The Trust has not and is not asking for additional funding. We are grateful for the support of both the Government and the Mayor of London as we embark on raising the final private funding.”