Nelson's ship docks at Trafalgar Square, in a bottle 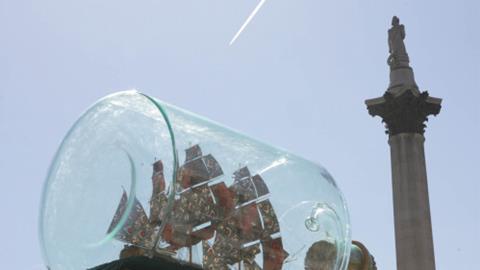 The artwork is the first commission for the plinth by a black British artist, and the first to refer specifically to the historical symbolism of Trafalgar Square, which commemorates the Battle of Trafalgar.

The ship’s 37 large sails are made of patterned textiles of a type symbolic of African identity and originally inspired by Indonesian batik design, mass produced by the Dutch and sold to the colonies in West Africa. The work thus invokes the complexity of British expansion in trade and empire, made possible through the freedom of the seas that Nelson’s victory provided.

Shonibare said: “For me it’s a celebration of London’s immense ethnic wealth, giving expression to and honouring the many cultures and ethnicities that are still breathing precious wind into the sails of the United Kingdom.

“A ship in a bottle is an object of wonder. Adults and children are intrigued by its mystery. How can such towering masts and billowing sails fit inside such a commonplace object? With Nelson’s Ship in a Bottle I want to take this childhood sense of wonder and amplify it to match the monumental scale of Trafalgar Square.”

Built in 1841, the fourth plinth in London’s Trafalgar Square was originally intended for an equestrian statue but this was never erected. It is now used as a location for a series of specially commissioned artworks, of which the most recent was Antony Gormley’s One and Other.

Ship in a Bottle was commissioned by the mayor of London and supported by Arts Council England and the Henry Moore Foundation with sponsorship from Guaranty Trust Bank.