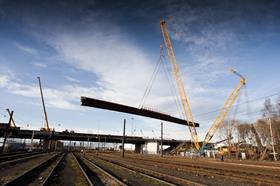 Network Rail is mobilising an army of 11,000 engineers to upgrade key parts of the UK’s rail network on Christmas Day and Boxing Day, as part of its biggest ever end-of-year investment programme.

New station facilities, new platforms, new flyovers, new junctions and thousands of pieces equipment will be installed and delivered in a £200m investment programme that will begin late on Christmas Eve once the last trains have run.

Mark Carne, Network Rail chief executive, said: “Making the railway better is what we aim to do everyday and our investment programme this Christmas, the biggest yet, is fully focussed on delivering a better service for passengers.

“With an 11,000-strong army we will deliver a huge amount of work during a quieter time for train travel. New technology and working practices mean we can keep lines open while our people work safely alongside, causing much less disruption than would otherwise be the case.”

While these are the biggest schemes being carried out over this very busy period, there are a further 300 projects being undertaken across 2,000 worksites across the country by Network Rail and its contractors between Christmas and New Year.