Willmott Dixon is the main contractor on the £45m job 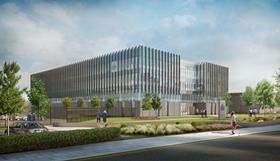 Plans for the new Merseyside Police headquarters in Liverpool have been submitted for planning approval.

The £45m project, which is being built by Willmott Dixon and designed by Ryder Architecture, will house more than 1,000 staff when its completed.

The new base is set to be located north of Liverpool city centre and will include two buildings, a four storey office and a two-storey annex building.

The development is designed to accommodate in the region of 1,200 staff across 12,800m2 of interior space.

The move will see the force move its headquarters from Canning Place to the new purpose built complex off Scotland Road, replacing the current facility.

This was labelled as “old, inefficient and no longer fit for purpose” by police commissioner Jane Kennedy. Merseyside Police force first revealed it plans to move to a new base in 2016.

Richard Wise, partner at Ryder said: “When complete the new headquarters will provide modern, efficient facilities which will make a very positive impact upon the area, as well as support the police authority’s ambitions to make significant savings in their estate management costs maximising their budget on policing.”

On site work is due to start in this summer.