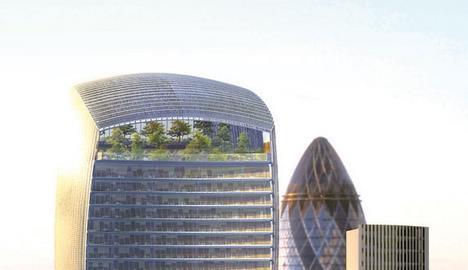 Rafael Viñoly's controversial Walkie Talkie tower at 120 Fenchurch Street has been redesigned, making it appear “more curvaceous”, according to the mayor of London's planning office.

The architect has made light-touch changes to the 38-storey tower, which increase its floorspace from 94,379m2 to 100,008m2. The building's overall height and massing remain unchanged.

Viñoly has not changed the building's overall height and massing
Most of the changes involve the replacement of plant floors to make a new floor of office space, but there are also changes to the external structural fins. These are the changes that the planning officers said would make the building more curvy in appearance.

The report said: “The proposed refinements to the building envelope result in slight changes to the silhouette of the building as seen from the front; it will appear in some views to be more 'curvaceous'.”

As a result, the report notes that fewer louvres or long fins will be required, which has the effect of making the cladding appear lighter.

The mayor's planning office said it would approve the building's construction pending design changes to the building's “sky garden” and a contribution by developer Land Securities to Crossrail.

The tower underwent a fractious public inquiry in the summer of 2007, during which English Heritage predicted it would become “London's ugliest and most oppressive building”. However, the government's design watchdog Cabe supported Viñoly's design and said it would “enhance the experience of a world city”.

Land Securities, the project's developer, has said it will build the £200m tower when the commercial property market returns to good health.