Changes would impact on station box under Gehry-designed residential building 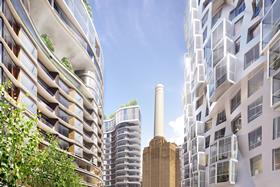 Design changes to the Northern Line extension to Battersea Power Station could see the final bill soar by £240m, according to reports.

Transport for London and the site’s Malaysian-owned developers are reportedly locked in talks over plans for an overhaul for the London Underground station and who will pick up the cost.

According to the London Evening Standard, the changes relate to the Frank Gehry-designed Prospect Place, which envisages more ambitious over-station development and would see a tube station incorporated into the development.

But this will require the station box - the tracks and the platforms - located underneath the development to be a lot stronger than was planned in the original contract.

The soaring costs were reportedly revealed in the minutes of TfL’s policy and finance committee, which said that the changes required “significant additional design work to develop a revised integrated station design which is capable of supporting the very different OSD (over station development) to that originally intended and contracted.”

A Ferrovial and Laing O’Rourke joint venture won the £500m deal to build the Northern Line extension in 2014.

The project involves the construction of two new stations - Nine Elms and Battersea - and is expected to be completed by 2020.