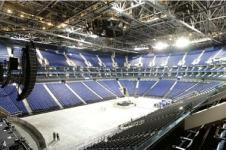 Plans for the use of the Royal Artillery Barracks in Woolwich and North Greenwich Arena (NGA) during the London 2012 Olympic Games have been given the go-ahead by Greenwich council.

The NGA – known to the UK public as the O2 Arena – will host artistic gymnastics, trampoline gymnastics and the basketball finals during Olympics, followed by wheelchair basketball during the Paralympics.

Work will begin in May 2012 to transform the NGA into an Olympic venue and will include elements such as tents, cabins, signage, services and equipment in and around the area. The temporary facilities will seat up to 18,000 spectators.

Olympic Delivery Authority chief executive David Higgins said: “The Royal Artillery Barracks will be a fitting venue for the shooting events at the London 2012 Games and our temporary works will help us deliver the best possible facilities for athletes.

“Securing planning permission is an important step forwards and keeps us on track to start installing the temporary measures on site early next year.”