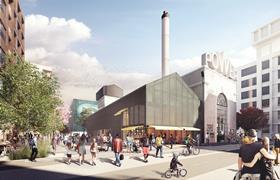 The developer behind the £250m Old Vinyl Factory scheme in west London is on the hunt for acquisitions after appointing a new director of joint ventures.

Condren, whose CV includes a spell at student accommodation fund Brandeaux, said: “I see significant opportunity to ramp up our acquisitions through further strategic partnerships in the London City Region, Manchester and Dublin.”

U+I, which rebranded after buying rival developer Cathedral nearly four years ago when it was known as Development Securities, is due to announce its full year results on 26 April.

The Old Vinyl Factory scheme (pictured) involves turning the former EMI headquarters and record pressing plant at Hayes into homes, shops and offices with Studio Egret West and AHMM among the architects working on the scheme.