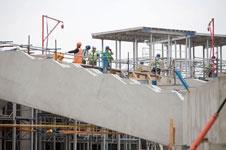 Legacy body to reverse decision to cut capacity to 25,000 in favour of creating 'living stadium'

Olympic bosses are preparing to scrap the decision to reduce the 80,000-seater Olympic stadium to a 25,000-capacity athletics venue after the 2012 Games.

A senior London Development Agency (LDA) source said the newly appointed Olympic legacy team had decided against scaling back the £547m stadium as it wanted to ensure a bigger sporting legacy after 2012.

The source said the team, led by former English Partnerships chair Baroness Margaret Ford and American regeneration leader Andrew Altman, wanted the stadium to be the “new Crystal Palace”. It is thought the pair feel the original plan lacks ambition and would fail to make the area attractive to visitors and residents.

The move raises big questions over the construction of the

Sir Robert McAlpine stadium, which began a year ago, and which was designed to be partly taken down.

Under Tom Russell, the previous legacy boss, the stadium was to be converted into a 25,000-seat venue after 2012. Russell left the project in April when the 2012 legacy delivery company was set up.

The new team is thought to want the stadium to remain a major sports-themed attraction and retain capacity to put on big events. It would keep a running track around the pitch, which would make it unviable for a Premiership football club. However, it would still be a centrepiece of the bid to host the 2018 World Cup.

Plans also include an Olympic museum, a sports hall of fame and a sports-themed Madam Tussauds.

The source claimed the plans had the provisional support of London mayor Boris Johnson.

The news comes as it emerged that Gareth Blacker, the LDA’s director of Olympic land, has been suspended while the body investigates how compensation payments to firms forced to move off the Olympic site are £60m more than budgeted for.

A spokeswoman for the Olympic Delivery Authority said: “Our brief has always been to design and construct a stadium that … can be scaled back to 25,000 seats and this has not changed.”