Olympics hockey contract out to tender 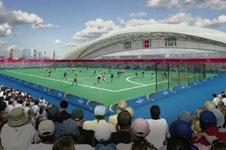 The Olympic Delivery Authority has advertised its last major construction contract, to design and build hockey pitches for the 2012 games.

The job will run as a framework agreement over four years and includes the supply, installation and maintenance of pitches, which will be used for hockey during the games and for five and seven-a-side football during the paralympic games.

Interested bidders have until 4 May to submit pre-qualification questionnaires through the ODA’s Procure For e-tendering system.

Up to five teams will then be shortlisted for the work.

Work for the seating at the pitches will be procured separately by the London Organising Committee of the Olympic Games, which is responsible for all temporary infrastructure on the Olympic Park.