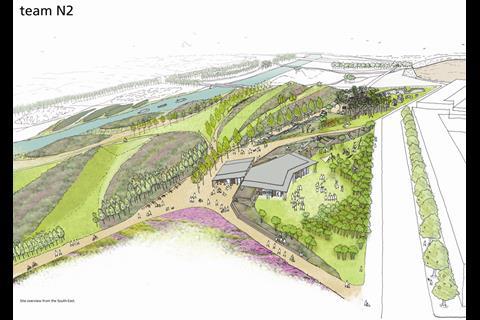 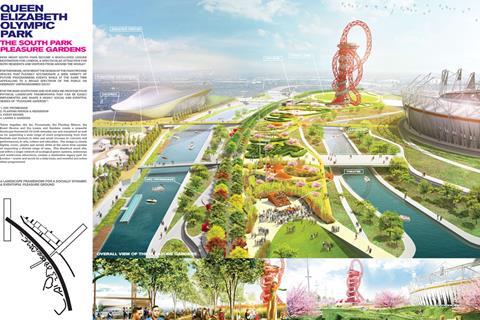 The Olympic Park Legacy Company has announced the winners of two competitions to create public spaces for the Queen Elizabeth Olympic Park.

Design teams were asked to produce plans for a visitor centre and playground in the north park, and a 50 acre urban landscape in the south plaza, between the Stadium, Aquatics Centre and the ArcelorMittal Orbit observation tower.

The practice is renowned for its contemporary design across a variety of projects, including the award winning and widely acclaimed High Line in New York City which is recognised as one of the best new public spaces in recent years.

For the north competition, London-based firm Erect Architecture was chosen to create a community hub building integrated into the parkland and river valley of the north park area.

The plan includes a playground offering the chance to climb trees, build dens and have everyday adventures in nature. Erect Architecture is an emerging practice with a strong focus on culture, education and play. Their buildings and playspaces have won several high profile awards for projects such as the Kilburn Grange Play park in London.

The winners were chosen from over 100 entries from across Europe, Asia and North America before being shortlisted to five teams per competition and judged by an expert panel.

They will now work with the Legacy Company to develop more detailed plans for each area.

“We were impressed by the creativity of all the design concepts but James Corner Field Operations and Erect Architecture really captured the character of the Park as a compelling destination.

“These spaces will be one of the first new public spaces and facilities added to the Queen Elizabeth Olympic Park. It is another example of how legacy plans for the Park are more advanced than any other previous host Olympic city.”

“The fantastic legacy we are building at the Olympic Park is already taking shape. These inspiring public spaces will be at the centre of the new communities that are rising in this brand new quarter of the capital. I congratulate these two winners, who now have the chance to put their stamp very firmly on the Queen Elizabeth Olympic Park for generations to come.”