Paddington Cube finally gets under way

Delayed £825m project expected to be completed by end of 2021 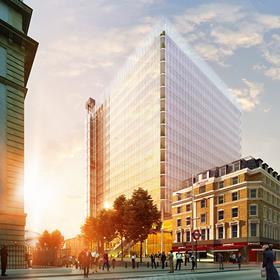 Work has finally started on the controversial £825m Renzo Piano-designed Cube development in Paddington, with a main contractor expected to be named shortly.

Plagued with delays – and several court battles – the Sellar project on behalf of owners Great Western Developments will feature Piano’s 360,000 sq ft 19-storey office building on the site of a soon-to-be-demolished former Royal Mail sorting office next to Paddington Station.

A new Bakerloo line ticket hall and entrances, 75,220 sq ft of retail and restaurant space and a new 1.35 acres public square will also feature in the scheme.

Planning was granted for the development in 2016 after being radically redesigned from original plans for a 72-storey tower, but work was further delayed as first Save Britain’s Heritage and then Imperial College Healthcare NHS Trust, which runs the neighbouring St Mary’s Hospital, launched legal challenges against Westminster council’s planning nod.

“With the arrival of the new [Crossrail] Elizabeth Line, Paddington will become one of the capital’s major transport hubs with direct fast links to Heathrow, the West End, the City and Canary Wharf.”