Work on Glenn Howells scheme set to finish in 2020 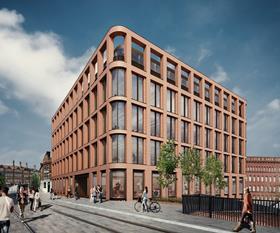 Plans have been submitted for 50,000 sq ft of offices in Wolverhampton city centre by Glenn Howells Architects, masterplanner of the Paradise scheme in nearby Birmingham.

Ion, the Liverpool property developer formerly known as Neptune, has submitted a planning application for the proposed i9 building on the city’s Railway Drive.

The new building (pictured) will provide Grade A headquarters office space and is scheduled for completion in 2020. It is also set to house restaurants or cafes on the ground floor and a rooftop amenity space.

The building is being delivered part of the wider transformation of Wolverhampton railway station.

The i9 building will be located next to Ion’s i10 building, which was completed by Balfour Beatty in 2016.

The new building has been given a red brick façade, which is designed to help it fit into the surrounding Victorian townscape in the middle of the city.

Ion’s previous projects include the Mann Island development on Liverpool’s waterfront and the redevelopment of the original Speke Airport hangars and terminal building.