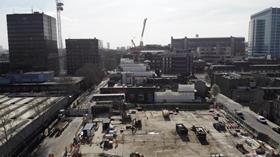 Unite is looking into taking legal action against a subcontractor of Costain-Skanska after alleging it has withheld more than £1m of overtime money from staff working on the HS2 station at Euston.

Hamilton-based Bowercross Construction is one of three subcontractors to provide labourers for enabling works at the terminal (pictured) by the main contractor, a JV between Costain and Skanska (CSJV).

Unite first alleged Bowercross had not been paying the correct rate for overtime in February, saying around 200 workers had taken a hit.

While it said some workers had lost more than £100 a week, it later said the business had agreed to pay up.

But according to Unite, Bowercross has now reneged on this commitment by paying workers a lower overtime rate based on Construction Industry Joint Council (CIJC) guidelines, rather than the agreed site rate.

Bowercross has not responded to a request for comment.

Overtime pay is calculated by multiplying a base rate.

CSJV said: “When we became aware of the issue, we committed to investigate and remedy any alleged underpayments.

“We found that the employees of one of our subcontractors were receiving a consolidated hourly rate that ensures their terms are better than they would be under the CIJC agreement.”

CSJV declined to comment further on overtime arrangements, including on how much they have paid Bowercross for workers’ overtime.

Unite national officer Jerry Swain said: “Unite had assurances from CSJV that the correct overtime rates would be paid and that workers would receive back pay for the money they were owed. CSJV also said that Bowercross had already been paid the money.

“Questions need to be asked about where that money has gone and what action CSJV will take against a subbie who has flagrantly disregarded its wishes.”