PC Harrington to be prosecuted over Wembley death 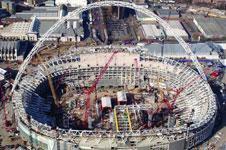 PC Harrington Contractors is to be prosecuted by the Health and Safety Executive for alleged breaches of health and safety law following the death of a worker at Wembley Stadium.

The fatal accident occurred in January 2004, when a platform became dislodged during a lifting operation and fell, hitting and killing one worker, and injuring another.

Safety at Work Act and the Lifting Operations and Lifting Equipment Regulations.

The case is due to be heard before City of London Magistrates Court on 10 March.