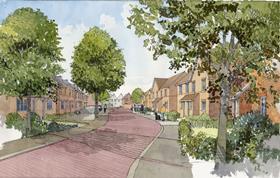 Persimmon snapped up 11,500 plots during the six months to June, as part of its push to build 16,000 homes a year within five years.

Persimmon said confidence among buyers “remained resilient” in the run up to the general election and had “improved subsequently”.

Persimmon added: “Customer demand has been supported by an increasingly competitive mortgage market over the last six months, together with continued growth in employment and some welcome improvement in disposable incomes.”

The firm will announce its half-year results on 18 August.