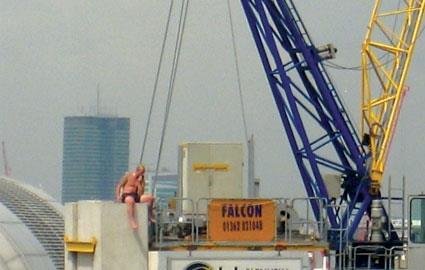 The employee, who had been sunbathing on a block suspended from a crane, was removed from his job on a site on Lime Street in the City on Wednesday.

The incident came to light after a reader sent this photo (right) to Building’s health and safety blunder competition. Building then passed the picture to Falcon.

Falcon said in a statement: “An internal investigation was immediately instigated which resulted in the crane driver being identified. On 6 August, the driver was dismissed and the Health and Safety Executive notified.”

Blenheim House Construction, the contractor on the office refurbishment scheme, said it was “shocked and disappointed”. It said: “Such disregard for his own and others’ safety and our policies will not be tolerated.”

The news came as it emerged that the HSE had written to firms that work with cranes to urge them to improve safety.

The executive is investigating a Falcon crane collapse in Liverpool last year, in which a joiner was killed and a crane driver injured.

A report on the incident said an “inadequate” safety bar had failed to prevent the luffing rope coming free in high winds.

The HSE has asked firms to:

• Provide relevant information to staff who operate and hire cranes.

The guidelines were welcomed by John Spanswick, chair of the Strategic Forum’s tower crane group. He said: “We don’t want to just react to accidents – we need to establish root causes.”