Communities secretary to decide on whether to give scheme green light

The plans, which include the demolition of existing buildings and the construction of a new terminal, were approved by Leeds City Council in February. 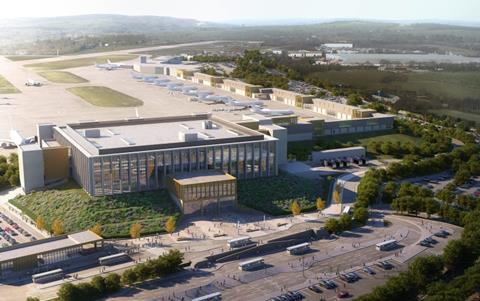 The plans were drawn up last year

But objections about the scheme’s contribution to climate change meant the decision was referred to the government.

The communities secretary has now said he needs more time for “proper consideration” of the requests for the plan to be called in.

> In Business: Contractors’ exposure to the ailing aviation market

The housing department, which is responsible for planning decisions, has said the council cannot grant planning permission without special authorisation in the interim. A date for a decision has not yet been set.

It said the new scheme would be a more efficient and sustainable development and enable the airport to reach its target of becoming operationally carbon net-zero by 2023.

Other major airports across the UK will be watching the outcome of the decision – with up to seven others currently mulling over expansion plans.

These include Heathrow’s plans for a third runway, which the Supreme Court cleared a path forward for last year, Gatwick, which has a £1.1bn investment plan over the next five years and Stansted, which began a planning appeal in January in a bid to continue expansion that Mace is already working on.

Birmingham airport’s expansion plans were put on the backburner last year because of the covid-19 pandemic.