The Bristol scheme has been designed by Feilden Clegg Bradley Studios 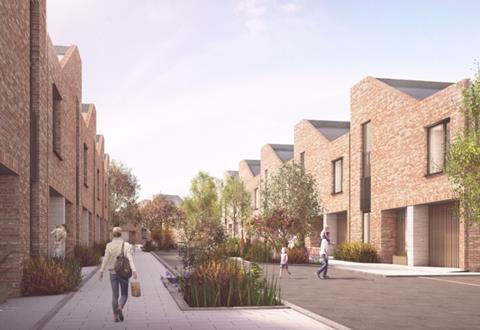 The first phase of Feilden Clegg Bradley Studios’ redevelopment of a historic former airfield near Bristol, featuring more than 44 “affordable” homes, has been given the green light by planners.

The Brabazon housing scheme on the northern outskirts of the city will eventually see more than 2,600 homes built on the 354-acre site of Filton airfield, which played an important role in the Second World War and decades later became the birthplace of supersonic aircraft Concorde.

The initial phase features 278 homes, 16% of which will be “affordable” to buy or rent.

Four aircraft hangars, including the famous Spitfire hangar, will be retained on the site and developed for cultural and recreational use.

The project is being developed by YTL Developments, which expects construction to begin before the end of 2019, with residents likely to move into their new homes in 2021.