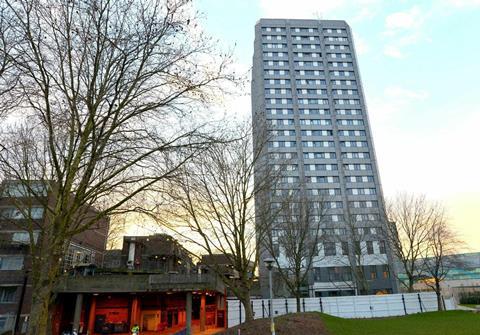 Grenfell Tower toward the end of its ill-fated refurbishment

The session also heard that fire-safety consultant Exova voiced concerns about Studio E’s proposals to reconfigure the tower’s four-storey podium to introduce new homes – something Sounes earlier conceded was the most complex aspect of the plans.

Inquiry counsel Kate Grange produced a note added to a record of an April 2012 design team meeting for the refurbishment project showing that overcladding was on the agenda for the tower at that stage – and that officers were unconvinced of the merits of such a plan.

”The planners responded negatively to aluminium rainscreen as a cladding solution, calling it plastic,” the note said.

“They would like to see the character of the tower retained or enhanced, even suggesting leaving the diamond piers exposed. They would prefer to see an insulated render system.” 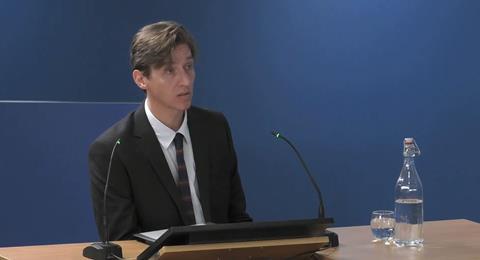 One section of the document – printed on Studio E-headed paper – highlighted by Grange noted that “improving the thermal efficiency and visual appearance of the façade” of Grenfell Tower was among the project objectives.

It added that the plans may be “possibly complementary” to Studio E’s neighbouring Kensington Academy and Leisure Centre project.

Much of Wednesday’s evidence on the groundwork for Grenfell Tower’s refurbishment, ahead of the fire which claimed 72 lives, focused on Studio E’s interaction with consultant Exova.

Barrister Grange sought to establish that Exova had been well aware from an early stage that Studio E planned to overclad the 24-storey block.

One piece of email evidence from the consultant also showed that there were concerns about plans to reconfigure the tower’s four-storey podium.

A communication from consultant Cate Cooney to another Exova colleague said the proposals were “not great” and would need “massage” to be considered acceptable.

“There are approvals risks to the project on the [firefighting] shaft/MOE front,” she wrote – referring to means of escape.

“They are making an existing crap condition worse so it’s a matter of working the worse bits out and making the new stuff work. No sprinklers wanted.”

Studio E’s Sounes said he did not recall “that level of concern” being expressed, or the issue of sprinklers being discussed at the time.

Sounes had been due to conclude his evidence this afternoon but was taken ill shortly before lunchtime.