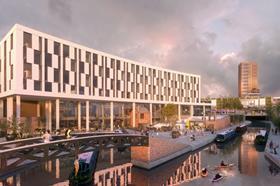 Details of the £150m transformation of Wolverhampton’s Interchange Commercial District have been unveiled at the Mipim property show.

Wolverhampton council and developer Ion have revealed plans for the commercial district, which will see almost 93,000sq m of office space built across strategic sites within an integrated regional road, rail and tram hub.

The announcement follows the success of the i10 development, which was delivered by Balfour Beatty in 2016 and is home to major firms including housebuilder Countryside aggregates business Tarmac. Work on the £12.3m i9 building due to start later this year.

The Midland Metro city centre extension will connect the tram directly to the front of a new railway station which is being given a £19m revamp by Galliford Try.