Developer Renaker submitted the applications to Manchester City Council as the latest phase of the Great Jackson Street masterplan. 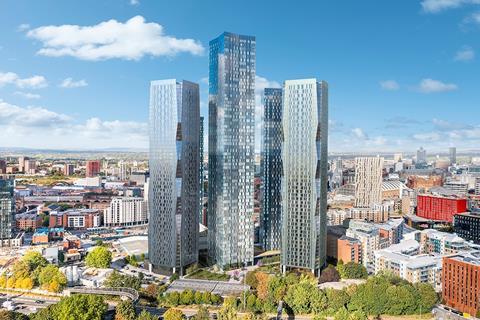 The residential tower specialist has already built four towers on the site, including the 201m South Tower, which became the tallest building in the UK  outside of London when it topped out in 2018.

The new proposals, which have been designed by Simpson Haugh, would provide a total of 988 one-, two-, and three-bed apartments along with co-working space, a gym and lounges.

Each tower would also have a private residents’ garden designed by landscape architect TPM Landscape.

The buildings, which feature chamfered edges bulging out in a zig-zag pattern, would be the southernmost schemes on the Deansgate Square site.

Renaker is also building three more towers immediately to the south of the site on the other side of Great Jackson Street.

The Elizabeth, Blade and Cylinder towers, all 52-storeys and all designed by Simpson Haugh, are set to provide more than 1,500 homes combined.

The developer is also working with the same architect on plans for a four further towers, ranging from 39 to 60 storeys, in the St John’s district of the city centre.