Three planning applications have been lodged to Birmingham city council to complete the second phase of the city’s £700m Paradise redevelopment.

It follows a public consultation launched in the summer on the plans by developer MEPC, which took over the scheme from Argent in July. MEPC is the development arm of Hermes which has been a long-standing funder of the Paradise scheme.

The second is for a 17-storey hotel designed by ISA Architecture & Design and Paradise masterplanner Glenn Howells Architects. 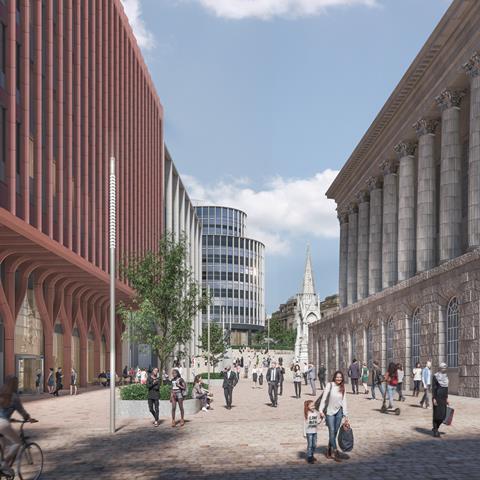 The third application is for a series of new public squares and pedestrian routes through the development, designed by landscape architect Grant Associates. It will see statues of steam engineer designer James Watt and chemist Joseph Priestley returned to the area.

Planning consultant Turley has worked with MEPC and the design teams on all three phase two applications.

The wider 2 million sq ft development will see up to 10 new buildings across 17 acres of the city centre when complete, including offices, shops, bars, cafes, restaurants and an octagonal 49-storey residential tower designed by Glenn Howells.