Plans submitted for floating park on the Thames 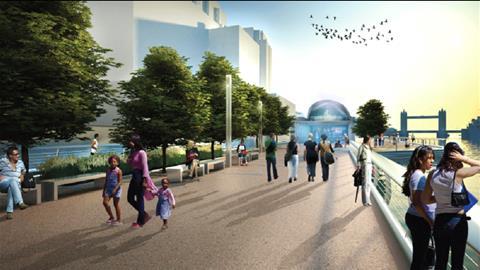 The Venus Group has submitted a planning application for a floating park on the Thames. Known as ‘the River Park’, the unique structure will span a kilometre length of open space along part of the Thames Embankment in the City of London.

The public will have free entry to the park which will host a number of events and exhibition. It will also include floating river pavilions along with a bespoke lido allowing people to swim on the River Thames.

The 540m eastern section will run from east of Cannon Street Rail Bridge to the east of Customs House by Tower Bridge. That section will comprise a new swimming pool and docking station for Thames passenger services.

“This is a very exciting moment for the team and we are proud to have submitted plans for the floating London River Park.

“These plans have been shaped by the expertise of many expert and experienced hands, as well as the people of London.

“During the months of consultation, we’ve been overwhelmed by the support people have showed us for these plans; where any concerns have been expressed we have endeavoured to discuss these thoroughly producing what we consider would be a world-class attraction for London.

“We recognise there is a lot of hard work left to do but this is a major step forward.

“With the backing of the City of London and GLA, we can make the floating river park a reality in time for the Queen’s Jubilee celebrations next year.”