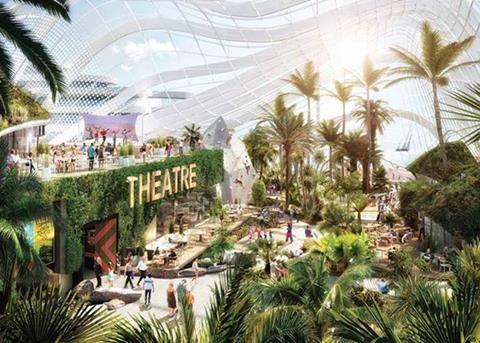 Proposals to regenerate the centre of Bognor Regis, the historic seaside resort, have been given the green light by Arun District Council.

The plans, developed by regeneration consultancy Urban Delivery, include a 3,000m² Winter Garden incorporating a new theatre, alongside a hotel, retail units, restaraunts and flats.

Secured investment to boost the prospects of the South coast town has already surpassed £100m, and Karl Roberts, the council’s director of place, said the recent study “encapsulates the bold and innovative thinking we feel is needed to unlock the full potential of Bognor Regis.

“These sites have been waiting too long for the redevelopment proposed and the time is now right to make it happen.”

While still at a preliminary stage, the ideas presented to the council follow a feasibility study considering development options for the town’s Regis Centre and Hothamton car park sites.

A proposed linear park for the Hothamton site will direct pedestrian traffic to and from the Winter Garden.

The rest of the site could feature a hotel, a raised seating area around the retail and restaurants to improve views of the sea and possibly a roof garden/performance space above the new theatre, as well as up-market residential accomodation.

Further residential accommodation, including provision for some affordable homes, is proposed on the Hothamton car park site.

The council is proposing to initiate a range of road and public realm improvements as part of the scheme.