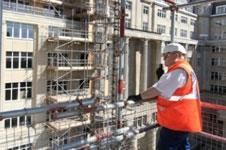 North west contractor and developer Pochin has appointed John Moss Group chief executive to succeed David Shaw, who is retiring at the end of May.

Moss spent 12 years at Amec and has advised Pochin for the past year.

The announcement came as Pochin released an interim management statement noting the challenging conditions of the markets.

Its concrete pumping division has been affected by a further deterioration in its market, particularly in the midlands and the north, the group said.

Similarly, within its property division, Pochin said the publicised decline in the commercial property market had had an inevitable consequential effect on the value of the Group’s development and investment portfolio.

But the group noted a positive cash flow overall, and said its forward order book in the construction division remained “reasonably healthy”.