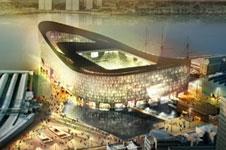 Work on the 45,000-seat stadium designed by Herzog & de Meuron for Portsmouth Football Club has been halted.

The stadium, famed for its ambitious design, is being developed by Sellar Properties and was due to open at Hornsea Island in August 2011.

But a statement from the club said that scheme will be put on ice and completed to tie in with the Football Association's World Cup bid for 2018 or 2022 instead.

The statement said: “Over the past year it has become increasingly apparent that this may take considerably longer to achieve.”

“This will include a major supermarket as well as a new club shop, ticket office and club offices and other enabling development, the nature of which is to be confirmed,” the statement added.