Detail of government’s controversial deregulation of the planning system published

Planners, architects, surveyors and chartered construction professionals have all condemned the government’s decision to press ahead with the creation of a raft of new permitted development rights.

The new rules, which include a right for developers to demolish vacant office and industrial premises and rebuild them as homes, were branded “disgraceful” by the RIBA, while the Royal Town Planning Institute described them as a “serious error”. 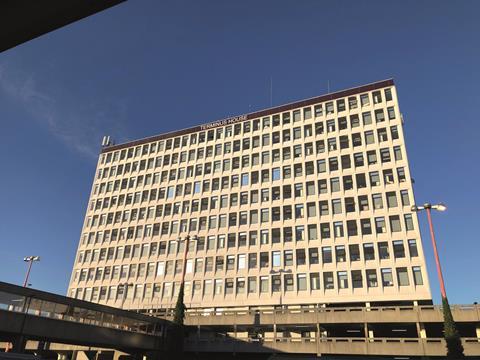 The government has pushed ahead with introducing the rights despite most of the changes being opposed in previous consultations – and despite the conclusions of a government-commissioned review, published earlier today, which found that previous permitted development rights had created significantly worse quality homes.

Permitted development rights, behind the controversial conversion of Terminus House (pictured), Harlow, into flats for homeless families, are a form of approval in principle by the government of certain prescribed forms of development, which can therefore bypass the normal planning process.

The three deregulatory changes made by the government today are:

The new rights will come into force on 31 August. To ensure only “vacant and redundant” properties are demolished under the demolition PD right, it will only apply to buildings constructed prior to January 1990 that have been “entirely vacant” for six months prior to application for PD approval.

Previously concerns have been raised that such a stipulation could encourage building owners to keep properties empty in order to increase their value by turning them into a development opportunity.

The government said the changes were designed to deliver much-needed new homes and revitalise town centres across England.

Housing Secretary Robert Jenrick said the reforms will cut out unnecessary bureaucracy and give small business owners the freedom they need to adapt and evolve.

He said: “These changes will help transform boarded up, unused buildings safely into high quality homes at the heart of their communities. It will mean that families can add up to two storeys to their home, providing much needed additional space for children or elderly relatives as their household grows.”

The government is expected to lay out even more fundamental reforms of the planning system in a policy paper later this month.

Since the introduction of a raft of change-of-use PD rights in 2013, including the right to convert offices into homes, official data shows that more than 60,000 homes have been created using the PD rights.

But the independent report commissioned by the communities ministry into the quality of homes produced under PD rights concluded that “permitted development conversions do seem to create worse quality residential environments than planning permission conversions in relation to a number of factors widely linked to the health, wellbeing and quality of life of future occupiers”.

It found that only one in five PD units met the government’s nationally-described minimum space standards, compared to three quarters of units delivered with planning approval. In addition, nearly three quarters of PD homes were single aspect – having windows on only one wall – compared to less than a third of conversions delivered through full planning. The research, which looked at 240 PD schemes, found 10 homes with no windows at all, a concern since the furore over a scheme in Watford which included flats with no windows.

RIBA president Alan Jones said described the policy extension as “truly disgraceful”. He said: “There is no evidence that the planning system is to blame for the shortage of housing, and plenty to suggest that leaving local communities powerless in the face of developers seeking short-term returns will lead to poor results.”

The RIBA immediately sent a joint letter with the RTPI, the RICS and Chartered Institute of Building to Jenrick criticising the move. It said that “further PDRs, including the ability to demolish and rebuild on existing sites — if implemented without significant safeguards—will lock in more unacceptable standard development, the consequences of which we will live with for generations or must rectify later at greater expense”.

It added: “Homes without windows, as well as other egregious example of such poor quality living conditions, must never be allowed to happen again.”

RTPI chief executive Victoria Hills said all homes produced under PD rights should be forced to meet space standards and contribute to community infrastructure. She said: “This move to increase the use of PDRs is a serious error of judgement from the government which will have a negative impact on the quality of life of future residents and local communities.”

Julia Park, head of housing research at architect Levitt Bernstein, author of a 2019 report on the quality of homes produced under PD rights, said: ”The arrogance and lack of understanding is breath-taking. How can it be right to enshrine new laws that are specifically designed to allow developers to evade some of the government’s own standards and almost all local planning guidance, when impartial evidence published by the same government on the same day, illustrates that this approach has already produced so much poor quality housing?”

The government said it has addressed concerns over quality by making sure all new and existing PD rights have a new obligation to ensure “adequate” natural light in homes produced. However, there is still no obligation to meet minimum space standards or provide play space or outdoor space, no local authority control over the location of units and no way of ensuring schemes contribute to community infrastructure such as affordable housing.

In a 2018 consultation, “less than a third” of respondents supported the idea of a new PD right for demolition and rebuild. The government said it would continue to look at the idea but would only introduce it following additional consultation. In an explanatory memorandum accompanying today’s new regulation, it justified the introduction of the new right without further consultation by saying the measure was necessary to support the UK’s response to the coronavirus pandemic.

It said: “To stimulate regeneration of our towns and cities and deliver additional homes more easily as part of the government’s response to the covid-19 pandemic, that right is now being brought forward at pace and without further consultation on the detail of the right.”