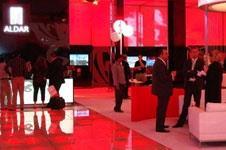 Profit fell at Abu Dhabi’s biggest developer Aldar by 43% in the third quarter of the year but executives at the state-linked firm say the UAE market is improving.

Aldar's chief financial officer, Shafqat Malik, told Reuters this week that the company made land sales in the third quarter, after it had sold nothing in the first half of the year.