The value of project starts crashed by 17% in the second quarter of this year compared to the preceding three months in early signs of trouble for the industry, a new report has found.

The number of planning approvals also dropped by 14% compared to the first quarter of 2021, and are down 9% on last year, according to information provider Glenigan’s July construction review. 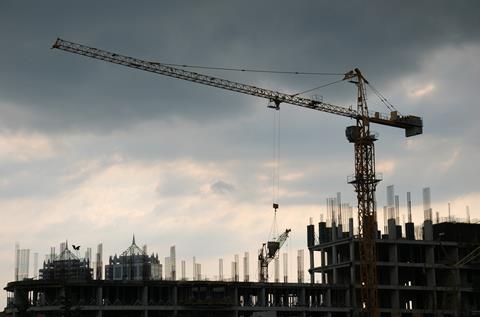 A lack of green lights for major projects are driving the trend, with approvals down by a third on the first quarter and over 50% on last year.

Glenigan economics director Allan Wilén said the dip may be the result of disruption to council planning departments during the first lockdown last year but added that it was “something to watch to see whether it is the start of a more serious trend”.

The volume of work carried out on sites also slipped by 0.8% in May in further signs of a slowdown to the post-covid rebound, with the report warning that material and labour shortages are likely to blame.

But Wilén said the industry was not entering a long-term slowdown and described the figures as a “pause for breath” following months of explosive growth earlier in the year.

He admitted that while the 17% drop in project starts “sounds awful”, it represented a general tailing off of the industry’s initial post-covid resurgence.

He added: “Supply constraints such as the logistics issue and material supply disruption are perhaps tempering the pace of the amount of work on site and the amount of project starts.”

The report also found that awards of main contracts rose by 12% in the second quarter, up 82% on last year and 9% higher than before the pandemic in 2019.

And the retail sector has surged ahead with project starts some 61% higher in the second quarter compared to the first – and 186% above 2020 levels – in what Wilén described as “quite striking” results.

He said that the growth in retail was being driven by smaller projects such as supermarkets and shops rather than larger schemes like shopping centres, adding that continued home working might lead to a “local high street renaissance”.

Yesterday, the Construction Products Association forecast that output would rise by 13.7% in 2021 and 6.3% in 2022, with infrastructure and private housebuilding expected to be the key drivers of growth.

But it warned that material and labour shortages, which it said are likely to persist for the next 12 months, are now the “key constraint” on growth.