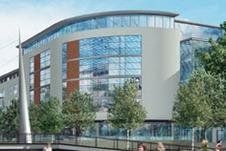 British Land and Land Securities are understood to be considering the acquisition of Wilson Bowden Developments from troubled housebuilder Barratt.

Barratt bought Wilson Bowden last year for £2.2bn, but the poor state of the residential property market has forced it to make a sale of the Developments division.

A source told the Independent on Sunday that both British Land and Land Securities were expected to make bids. More than 80 companies have reportedly made enquiries to Jones Lang LaSalle, which is advising on the sale.

Wilson Bowden Developments is expected to sell for around £250m.