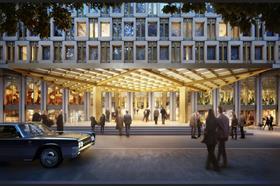 Westminster council has given Qatari Diar’s plans for the soon-to-be former US Embassy on Grosvenor Square the green light.

The developer is set to transform the Eero Saarinen grade II-listed building into a 137-bed hotel. Designed by David Chipperfield, it will feature a spa and a ballroom with space for 1,000 people.

The council gave the go-ahead for the redevelopment despite Westminster’s director of planning admitting and agreeing with the objections raised by the Twentieth Century Society in his report that some of the changes would be harmful to the special architectural interest of the building.

The changes include the addition of a double-height sixth storey, set-back roof storey, removal of the glacis and demolition of parts of the interior.

However, the director of planning added that the public benefit from the conversion of the building outweighed the harm caused to it.

Earlier this year when the scheme was unveiled, Chipperfield said: “Our design proposals protect and respect the significant architectural and structural characteristics of Eero Saarinen’s design, with a focus on restoring and enhancing this unique building to secure its long-term future at the heart of Mayfair.”

Qatari Diar chief executive and chairman Sheikh Jassim Al Thani said: “We are delighted Westminster City Council has approved our plans for a world-class hotel, retail and event space at the current US Embassy building in Grosvenor Square, Mayfair.

“A hotel of this calibre perfectly aligns with the vision and ambitions for the neighbourhood and will help to ensure Mayfair retains its pre-eminent reputation as an outstanding place to live, visit and work.”

“Qatari Diar takes its responsibility to the local community extremely seriously and we will continue to engage with all stakeholders and interested parties moving forward. We plan to begin work on site once the US Embassy moves to its new home at Nine Elms.”

The embassy is due to move into its new building in Nine Elms, designed by US architect Kieran Timberlake, next year.

The new US embassy, designed by Timberlake, is due to complete next year. The site, protected by a moat, includes a 12-storey main building for the embassy’s 1,000 staff along with a further three separate pavilion buildings housing checkpoints for visitors and staff.