Firms have until next month to express interest in the scheme

Contractors are on notice for Scape’s new £750m construction framework.

The public sector procurement authority has fired the starting gun on the race for its four-year regional framework for the Midlands and the East of England.

It will be used for projects with a value of up to £7.5m. 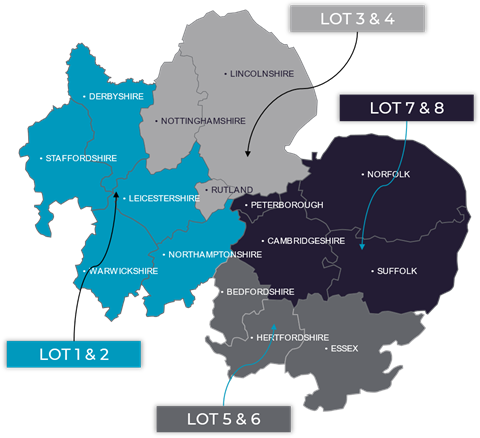 The deal, which includes a range of new sustainability-supporting features, is set to go live next August.

Firms currently on the framework, which has been used to procure 362 projects to date, include Morgan Sindall, Graham and Lindum.

The new deal will be based on four geographical regions with two lots for each.

Following a consultation with public sector clients, the new framework will adopt a number of new features designed to help them procure projects quicker.

>> Explainer: Scape bosses on changes under the new frameworks

These include a parallel lotting structure allowing clients to engage early with multiple contractors before awarding a project.

This means that for the same geographical area there will be awards to separate contractors on separate lots and the client can select which contractor it wants from either lot.

This approach negates the need for clients to hold mini competitions and has already been used in the procurement of Scape’s £13bn national major works frameworks, which are due to be awarded this summer.

It will also remove value bands to give clients more choice over contractors and services and will also include an agreement to enable the adoption of sustainability targets.

Invitations to tender are set to be announced towards the end of this year following pre-market engagement over the summer.

Firms interested in bidding for the deal have until 24 September to fill in the pre-qualification questionnaire.