Developer behind project is Argent Related

Red Construction has been appointed by Barnet council and developer Argent Related to build a temporary visitor pavilion in Brent Cross.

The three-storey, 8,000sq ft centre will be the first building at the £5bn Brent Cross Town regeneration project. 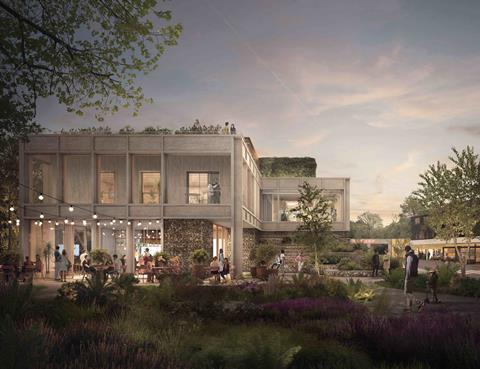 The pavilion will feature a timber-clad facade

The contractor said the Moxon Architects-designed building, which is due to open to visitors by the end of this year, will be built with a cross-laminated timber superstructure with a timber-clad facade.

It will include an exhibition space, commercial space on the ground floor and further space for community use.

The Farringdon-based contractor started work on the scheme at the end of last month with the project team including structural engineer Expedition and MEP engineer Loop Engineering.

The Brent Cross Town development will see around 6,700 new homes built in the north London borough, along with 3 million sq ft of office space and 50 acres of new parks and playing fields.

Red’s pavilion job follows the contractor’s appointment in December last year to a £17m redevelopment of Townsend House in Victoria for Hong Kong-based developer ITC Properties. It is also working on an £8.1m residential conversion of a Victorian villa in south London.