Earlier plans for the Hertfordshire town were knocked back last year 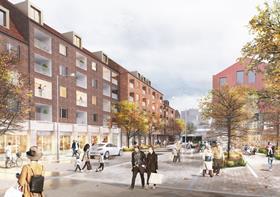 The redevelopment of a former railway goods yard site at Bishop’s Stortford has been given the green light after an earlier planning application was rejected.

East Herts district council’s Development Management Committee refused the previous version of the scheme, which is being developed by Solum, a joint venture between Network Rail and Kier Property, in May last year.

The council had previously flagged concerns about the height of some of the buildings planned for the market town along with the then 680 home scheme’s density.

Architect Pollard Thomas Edwards was brought on to to the scheme which will now feature 586 homes, of which at least 117 will be affordable, along with office space for businesses, a hotel, retail space and a care home.

It will also provide station and transport improvements including additional station car parking, better cycle and pedestrian links and a new two-way road providing better links through the site to the town centre.

Building work is expected to start in the next few months.