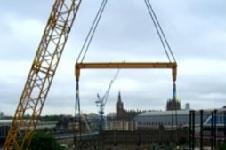 A disused railway bridge spanning Regent's Canal was lifted away from the canal last week by one of the UK's largest cranes, in preparation for the first major phase of the 8m sq ft regeneration scheme at King's Cross.

The King's Cross scheme, which will include 20 new streets, 10 new public spaces, 2,000 homes and the restoration of 20 historic buildings and structures on a 27ha site, is being developed by King's Cross Central Limited Partnership, a joint venture between Argent (King's Cross), London & Continental Railways and DHL - Exel Supply Chain.

The 265-ton Goods Way railway bridge was removed as part of the enabling works for the Eastern Goods Yard, which will provide a new site for Central Saint Martins College of Art & Design as well as Granary Square, a public space the size of Trafalgar Square.

Completion of the works on this part of the site, which was originally used in the 19th century for storage and distribution of grain and includes Victorian listed building The Granary, is scheduled for 2012.

The enabling works requiring removal of the bridge aim to provide better pedestrian and public transport links from north to south of the site.