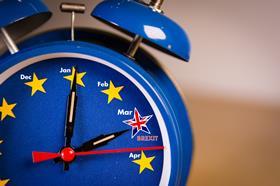 Contractors, architects and product manufacturers can breathe a sigh of relief with the government confirming that products which are given the OK in Europe will be able to be used in the UK in the event of a no-deal Brexit.

In its guidance on construction products regulation if there is no-Brexit deal the government said it had laid a draft statutory instrument on 18 December 2018 detailing the arrangements that will apply if the UK crashes out of the EU without a deal.

It said: “This will mean that immediately following the UK’s exit from the EU, the European harmonised standards and UK designated standards will be identical.

“The government will publish and maintain the list of UK designated standards. This will be a UK-wide approach with the standards applying at UK level.”

It said: “In a no deal scenario it will be a matter for the European Commission to determine the arrangements for products on the EU market from the date that the UK leaves the EU.”

The government said the European Commission had published a notice to stakeholders which said that UK bodies “would not be in a position to perform conformity assessment tasks pursuant to Union product legislation as from the withdrawal date”.

Meanwhile, the government also announced that the qualifications of EU architects would continue to be recognised in the event of a no-deal Brexit.

The government said it will maintain a system of recognition for individuals with relevant EEA qualifications and access to the profession in their home state, subject to immigration policies.

RIBA chief executive Alan Vallance welcomed the “much-needed clarity” on what will happen when the current system of reciprocal recognition – the Mutual Recognition of Professional Qualifications (MRPQ) Directive – lapses in the event of a no-deal Brexit.

He said: “Ensuring that EU qualified architects can continue to practice in the UK post-Brexit has been a priority concern for the architecture sector. I welcome the news that they will be able to register in much the same way as they do now should there be a no-deal situation.”