Retailers just “taking stock” and pausing, rather than completely halting 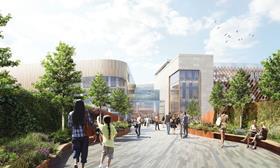 An artist’s impression of how the Brent Cross development should look.

Consultants working in retail remain optimistic about the sector despite Hammerson’s flagship scheme at Brent Cross being put on hold this summer.

The developer mothballed the £1.4bn project in July – on which main contractor Laing O’Rourke had been expecting to start work – citing “turbulence in the UK retail markets”.

Robin Dobson, director of retail development at Hammerson, said: “We’re fully committed to it. But with the changes in the retail market, we’re reviewing how our plans need to change. This includes the weighting to retail as opposed to other uses.”

“The environment has got to be nicer. If the places are ugly, people now have a choice, they don’t have to go out and shop”

Hammerson is also behind another huge scheme in Croydon, a £1.4bn development which it is developing in partnership with Westfield.

And Dobson admitted a start on site in the south London borough was still some way off. “There’s a long journey to take a project like this to site.”

But Daniel Hunt, director at consultant Aecom, said his firm and others are looking at ways to revamp developers’ portfolios. “We’re doing a lot of feasibility work, optioneering for clients,” he added. “This means getting projects up to a certain stage, rather than going on site.”

He added: “Retailers are taking stock. And a lot of developers are in pause mode. Rather than completely halting, they’re pausing for six months till they get over Brexit.”

And Mark Williams, director of shopping centre investor and asset manager Hark Group and president of the sector’s trade body, Revo, said work for firms hadn’t dried up completely. “The environment has got to be nicer. If the places are ugly, people now have a choice, they don’t have to go out and shop.”

Kevin Dengate, retail head at contractor ISG, said his firm will turn over £400m of retail work this year, a record figure, and that the negativity is overdone.

He added: “Frankly retailers have always historically gone out of business. Nobody talks about the huge number of new online brands which are now starting to look for physical space.”

The Construction Products Association predicts retail construction output to fall 10% this year before stabilising in 2019 and 2020.