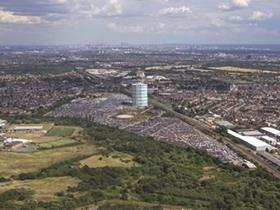 Berkeley Group’s revised masterplan for the regeneration of the former Southall Gasworks has been approved by Ealing council.

The decision paves the way for the housebuilder to create 3,750 new homes and up to 50,000sq m of commercial space on the 36ha brownfield site named Southall Waterside.

The site in west London, which has been masterplanned by JTP, has been unused for decades, with previous architects and masterplanners attempting to unlock it since 2009 including Make, Urbed and Jestico & Whiles.

The scheme will also become home to a primary school, a health centre and see over half the site dedicated to open space, including landscaped public parkland, leisure and play spaces, and piazzas.

Berkeley Group is now preparing a detailed planning application for Phase A of the development, which is expected to be submitted shortly. Plans for the first phase include 618 new homes, of which 186 are designated affordable.

Sean Ellis, executive director, Berkeley Group said the approval for the revised masterplan marked the start of an “exciting new future” for the site, the largest regeneration scheme in the area.

Ealing council leader Julian Bell said: “There is a severe shortage of housing across the capital and we need new developments like this to bring thousands of much needed new homes to the borough. Southall is being transformed and these plans are an important part of our drive to regenerate the area, bring in jobs, shops and community facilities.”