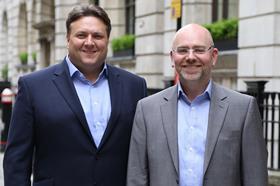 The division’s chairman Ann Bentley told Building the firm has completed a restructure – including splitting into three operating divisions and extending the UK board – to “enable ambitious expansion”.

Rider Levett Bucknall’s (RLB) UK division turned over around £40m and employed “just under” 400 people in the financial year to 30 April 2014, Bentley said.

RLB UK has split into three operating divisions focussed on the Midlands and North; London and South and major corporate occupiers, with the latter covering key accounts, frameworks and international work.

The three divisions will report into an enlarged UK board of seven rather than five, which includes Bentley and RLB UK chief executive Lance Taylor.

RLB has promoted Andrew Reynolds and Dean Sheehy (pictured) to join the UK board as director of the major corporate occupiers division and director of the Midlands and North division respectively, while Tony Catchpole’s board role has been extended from London managing partner to director of the London and South division.

Bentley said the new structure would enable the UK division to “continue to build on growth in major projects and international work, while building on momentum in the UK.” Bentley added the UK division would consider acquiring “small specialist companies” to achieve its expansion plan.

RLB is an alliance of three independent companies based out of the UK, Hong Kong and Australia which together employ over 3,500 people across more than 120 global offices.