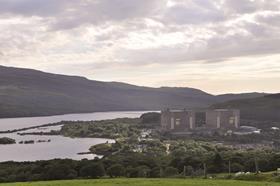 Consultant Rider Levett Bucknall and engineer Arup have been appointed to provide engineering and structural consultancy at Magnox’s Trawsfynydd site.

The firms will provide engineering and design management services to accelerate work on the reactors’ safestore - the building where the last parts of the reactors’ core is kept until 2070.

The safestore project forms part of a £90m stream of work to the site’s plant and structures between 2012 and 2016.

RLB and Arup will work at the site until the end of 2016, when the safestore is complete and enters a period of care and maintenance.

Deryck Barton, head of nuclear at Rider Levett Bucklnall (RLB), said: “Decommissioning work at Trawsfynydd is well advanced and there is an opportunity to speed-up existing projects to achieve and earlier end point.”

Gwyndaf Williams, commercial manager at Trawsfynydd for Magnox, said: “The reactor safestore project is a key part of Trawsfynydd’s journey towards care and maintenance. The safestore protects the site’s reactors which have been emptied of nuclear fuel from the elements.”

RLB currently works on a number of Magnox sites including Bradwell, Hinkley and Berkley. Arup is already working at the Trawsfynydd site.