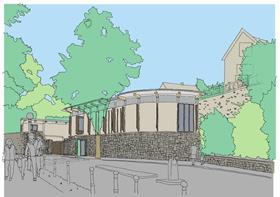 Rydon has been appointed as the contractor to deliver a new visitor centre for the Clifton Suspension Bridge in Bristol, in time for the bridge’s 150th anniversary.

The two-storey Heritage and Learning Centre, designed by Alec French Architects, will feature a large exhibition space and will be built to incorporate an existing stone wall.

The building will replace a temporary structure currently in place, and will sit next to new offices for the Bridge Master and their staff on the Leigh Woods side of the bridge.

The project is aiming to be completed in time for the 150th anniversary of the bridge’s opening on 8 December 2014.

Paul Barber, south west regional director of Rydon Construction said: “Having recently delivered a careful refurbishment to Brunel’s Engine Shed, we are very proud to now be involved in a significant chapter of another iconic Bristol location.

“We’re really looking forward to working alongside the trustees of the Clifton Suspension Bridge over the coming months to bring to life a great new addition to Bristol’s tourist industry.”

The project is part-funded by the Heritage Lottery Fund and forms part of a larger investment to modernise the bridge’s facilities.