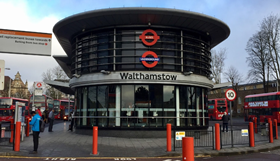 Mayor of London Sadiq Khan has announced the latest schemes to receive funding from Transport for London’s Growth Fund.

Khan confirmed £24m had been allocated to improve stations in Colindale, Walthamstow Central and Ilford, as well as improve London Trams services to Elmers End.

TfL’s Growth Fund is designed to help finance sustainable transport infrastructure schemes that could unlock development and regeneration opportunities in some of London’s most important growth areas.

The upgrade of Walthamstow Central Station will provide a second entrance to the station as well as delivering step-free access.

The new station building at Colindale will deliver step-free access and new pedestrian and cycle links, while the new southern entrance at Ilford Station has been designed to reduce pressure on the main station entrance.

The final project will see double tracking of the branch line and a second platform at Elmers End tram station.

Khan and TfL expanded the Growth Fund to £550m in December 2016 to allow more schemes to be brought forward.

More than 15 schemes have been supported by the Growth Fund so far, including new stations in Tottenham Hale and White Hart Lane, as well as road and public realm schemes in Wandsworth and the new Barking Riverside London Overground Extension, which will be delivered by next summer.

TfL is now reviewing a range of other schemes from across London to see whether they would be suitable for part-funding from the remaining £80m and hopes to be able to confirm these later this year.