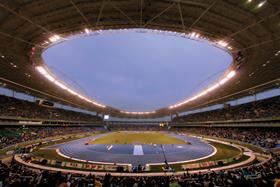 One of the main stadiums due to be used for the Rio 2016 Olympic Games has been closed indefinitely after major structural problems with its roof were discovered.

Rio de Janeiro’s Joao Havelange stadium was built only six years ago and was being used as the main football venue in the city while another stadium, the Maracana, is renovated ahead of next year’s World Cup.

According to the BBC, Rio mayor Eduardo Paes told a news conference yesterday (Tuesday) that he had been told about the structural problems at the stadium - locally known as the Engenhao - earlier the same day.

He said: “I asked if this represented a risk for spectators and they told me it did, depending on the wind speed and temperature.

“On that basis, I immediately decided to close the stadium until we had more details.”

He said the situation was “simply not acceptable” given that the Joao Havelange stadium – which opened late and over budget in 2007 - is relatively new and warned that those responsible would be held to account.

The news will come as a major embarrassment for Brazil as it prepares for the two most prestigious events in international sport.

The authorities have also admitted delays in work on the Maracana and a funding problem at another stadium, which is set to host the opening match at the World Cup.