A former government fire safety official has denied the government covered up a series of disastrous results of fire tests on cladding products to avoid a “crisis” in the construction industry.

Government-funded tests of 14 cladding systems in 2001 resulted in a string of dramatic failures but the results were not made public until this year.

Products tested included ACM, the type of combustible plastic-cored panel used on Grenfell tower and blamed for the spread of flames up the walls of the building in the 2017 fire.

The Grenfell inquiry has already heard that the material had failed the test “catastrophically”, producing 65 ft-high flames – twice the height of the test rig – just five minutes into the 30 minute test. 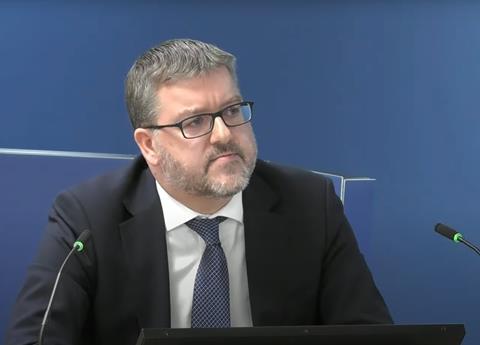 But the results of the tests, which were carried out by the Building Research Establishment, were only shared with a handful of industry experts.

ACM panels went on to be installed on more than 400 high-rise buildings across the UK and were only explicitly banned in November 2018.

Anthony Burd, the government’s building safety lead at the time of the tests, was asked by counsel to the inquiry Richard Millett QC yesterday why the results were not made public.

Burd said it was “typically government policy” to publish tests of this kind and suggested that they had “fallen down between the [government] department and [the] BRE”.

“Given the fact that not publishing it was unusual, was there a cover-up?”, Millett asked.

Burd said: “From my perspective, sat here today, there was no cover-up.”

“Some people looking at this, the importance of the results, your evidence today, might think that the government had deliberately covered up the test results,” Millett said.

Burd replied: “I can see how that might appear and why people might think that. I can only provide you with my assurance that that is not what happened from my perspective.”

“They might also put to you the fact that the reason why there was a cover−up was because of the fear of what industry might do,” Millett said, adding: “Or that the government might know that releasing these results would immediately trigger a cladding crisis.”

Burd said that the results had been shared with an industry group advising the government on setting new test criteria for building regulations.

Asked if a decision had been made to not make the data public, he said he “did not believe so”, adding that he presumed the results had formed part of a “huge amount” of research carried out ahead of a review of building regulations in 2006.

Burd is the first government official to give evidence to the inquiry, which is currently examining the role played by successive governments, from the Blair administration onwards, in allowing combustible materials to be installed on tall buildings.

He said that the 2001 test on ACM had resulted in a “very fierce, fast fire” that “obviously” needed to feed into ongoing work at the time on reviewing building regulations.

Asked if he recalled the BRE “communicating their own sense of shock” at the results, he said he did not.

Following the tests, the government began the process of introducing tougher European fire ratings into UK building regulations. The intention had been to phase out the existing ‘Class O’ rating, which could be achieved by combustible materials including ACM.

However, the ‘Class O’ rating remained part of the guidance until after the Grenfell fire which claimed the lives of 72 people.

The inquiry has already heard how a diagram in the guidance produced in 2006 appeared to equate the European standard ‘Class B’ with the UK ‘Class 0’.

Hearings have also been told how an ambiguous passage in the guidance on external walls had led to a “10-year legacy of misunderstanding” in the construction industry as it was seen by many as permitting the use of combustible cladding panels.

Burd said that an overriding requirement in the regulations was that a building should offer “adequate resistance” to the spread of flame, and that the guidance also warned about using combustible materials in a general sense.

Inquiry chair Martin Moore-Bick asked Burd if he meant that these elements of the regulations were sufficiently strong to override other parts of the guidance which might appear to permit combustible materials. Bird replied: “Yes.”

Moore-Bick asked: “Did it ever occur to you that there might be people reading [the guidance] who would not get that message because it was not sufficiently clearly worded?”

Burd replied: “Yes, sir, that risk − that is a possibility.”

“Sometimes you have to write guidance or even rules for the sort of people who are not as careful as you are,” said Moore-Bick. Burd agreed.

“Did that cross your mind?” asked Moore-Bick.

Burd replied: “I don’t believe it did at the time, sir.”