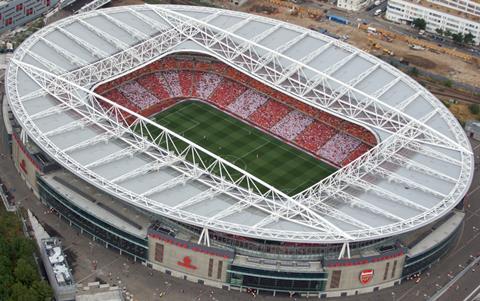 Steelworks specialist Severfield said it is on track to deliver £26m of pre-tax profit in 2020 after revealing a “solid order book” in a pre-close trading update.

The North Yorkshire-based firm, which has worked on a number of large-scale projects in London including the Shard, centre court at Wimbledon and Arsenal FC’s Emirates stadium (pictured), said its overall trading performance has been in line with upwardly-revised expectations announced in November last year.

Its UK order book of £242m as at 1 April was in line with normal order book levels, equating to eight to 10 months’ annualised revenue.

“Our pipeline of potential future orders has remained stable with a good balance of work across all key market sectors,” the update added.

Severfield said its the order book of its Indian joint venture – £65m at 1 April versus £79m on 1 November – remained strong and contained an “appropriate mix of commercial work and lower margin industrial work”.

The firm, which in January appointed Alan Dunsmore, previously the finance director, as its new chief executive to replace Ian Lawson who stepped down because of ill-health, will announce its results for the year ended 31 March 2018 on 20 June.