The firm will provide 15,900 tonnes of steelwork for the £1bn building 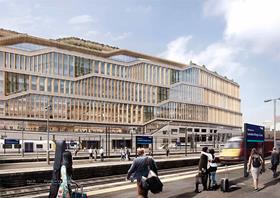 It will provide 15,900 tonnes of steelwork for main contractor Lendlease at the 11-storey building. Work is scheduled to begin on site in June 2018.

In August, Google won approval from planners at Camden council for the new 80,819m2 headquarters. The reserved matters application for the building from US-Danish architect BIG and Heatherwick Studio followed outline planning approval in 2013 from the council for a previous scheme designed by AHMM.

It will fill a one hectare hole at the southern end of developer Argent’s wider 27-hectare scheme, next to King’s Cross station.

Severfield, which is also carrying out work at Tottenham Hotspur’s new ground, has already worked on a number of key buildings in the King’s Cross area, including 3 and 4 Pancras Square, King’s Cross R1 and S2, and retail quarter Coal Drops Yard, designed by Thomas Heathrwick, and which is being built by Bam.

An operational turnaround plan has been in place at Severfield since 2013, with the firm last year setting out plans to double profit before tax to £26m and deliver cash generation of over 85% as a base level of achievement by 2020.

The structural steel specialist has seen its profit jump by over 50% for the first half of its current financial year.