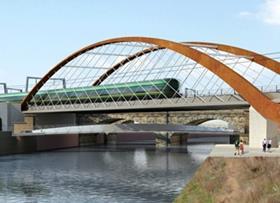 Steelwork giant Severfield expects further growth in profitability after posting a return to profit in a solid set of half-year results today.

Chief executive Ian Lawson told Building he expected the firm’s profitability to “continue to improve” over the coming months, after the firm posted pre-tax profit of £1.7m for the six months to 30 September 2014, up from a £2.7m pre-tax loss for the same period last year.

The return to profit was underpinned by growth in the firm’s UK underlying operating margin to 3.7%, up from 2.5%, while the firm’s share of losses from its Indian joint venture reduced to £0.3m, down from £1.3m.

Lawson said: “This is a positive set of results and we expect sustainable profit and margin growth.”

The firm noted that once £1.3m of exceptional amortisation costs were stripped out of the results, it posted an underlying pre-tax profit of £3m.

Severfield’s £28.9m pre-tax loss over 2012-13 included £20.1m of cost overruns on problem contracts, including a £10m write-off on 122 Leadenhall tower in London, known as the Cheesegrater, leading to a series of profit warnings and the exit of Lawson’s predecessor Tom Haughey.

He said: “It’s about actually managing the risk properly. We’ve got processes in place so that we fully appraise the risk we’re taking on.”

Lawson said the commercial, transport, industrial and data centre sectors were all “looking positive” for the firm.

Lawson said the firm is “assisting” with an investigation into the breakage of two steel bolts on the Cheesegrater tower earlier this month, which is being carried out by developer British Land, contractor Laing O’Rourke and engineer Arup.

He said there was “no suggestion at this time” that Severfield would face any liability for the breakages.